“We looked at a number of potential vendors but Fujitsu was a clear leader in terms of performance, cost and capacity,” adds Ben Carter. “It would also allow us to seamlessly migrate to a new virtualised environment.” 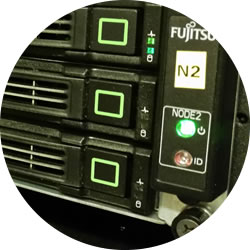 Fujitsu Cluster-in-a-box provides a fully pre-configured, high-availability IT environment for large academies within one chassis that keeps expenditure and risk to an absolute minimum. The cluster consists of two PRIMERGY servers, shared storage and appropriate network components in compact housing.

Furthermore, Levett Consultancy takes the original Fujitsu solution and wraps it in further customised class leading software from Microsoft, Impero, Symantec and Redstor already built-in. This means it works straight out of the box, enabling Culloden Primary Academy to simply plug it in and be ready to go for continuous, cost-effective availability.

“Fujitsu Cluster-in-a-box is a simple, low-cost and reliable solution that works off the shelf,” continues Ben Carter. “We were able to easily migrate to the Cluster-in-a-box over the half term period and even though we were faced with some corrupt files, the system’s in-built redundancy ensured we could remain operational.” 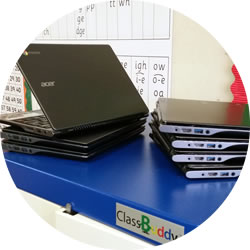 “We have almost 600 pupils and over 100 staff, all of whom rely on technology to bring learning to life and make the classroom more engaging,” says Ben Carter. “Unlike the previous server platform, the Fujitsu solution allows us to run over 100 windows devices and 330 Google Chromebooks simultaneously without any detriment to the user experience, making this enhanced learning experience possible.” 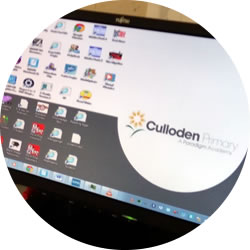 Besides the simple installation, Ben Carter has noted several key advantages to the Cluster-in-a-box approach. Not only did it come in under budget, reducing the burden on the school’s finances, but since its installation it has proven flexible, resilient and high-performing.

“The Fujitsu solution can accommodate all the devices and applications simultaneously with no lag or impact on performance, which means I have less to worry about and teachers can get on with teaching lessons rather than having hardware issues,” comments Ben Carter. “And it is remarkably robust, since migrating to the Cluster-in-a-box last year we have had no problems to resolve.”

It also provides a platform for future growth as new virtual machines can be deployed instantly and easily, allowing Ben Carter and his team to add new services without additional cost. This scalability will prove crucial as the school continues to grow.

“Fujitsu’s Cluster-in-a-Box simplicity and stability makes it the ideal solution for educational establishments,” says Ben Carter. “It also requires fewer licences and has built in redundancy so, if there are any incidents, they won’t affect the performance.”

Culloden Primary Academy is now looking to the future and underpinning its vision is the Fujitsu Cluster-in-a- Box, which allows the Academy to scale its wide range of educational applications and devices for pupils and teachers at low cost and most importantly having a positive effect on learning outcomes.

School ina Box built using Fujitsu’s Cluster-in-a-Box technology has given us a high-performing, cost-effective and ultra-scalable IT platform that will enable our future growth Ben Carter (Principal)